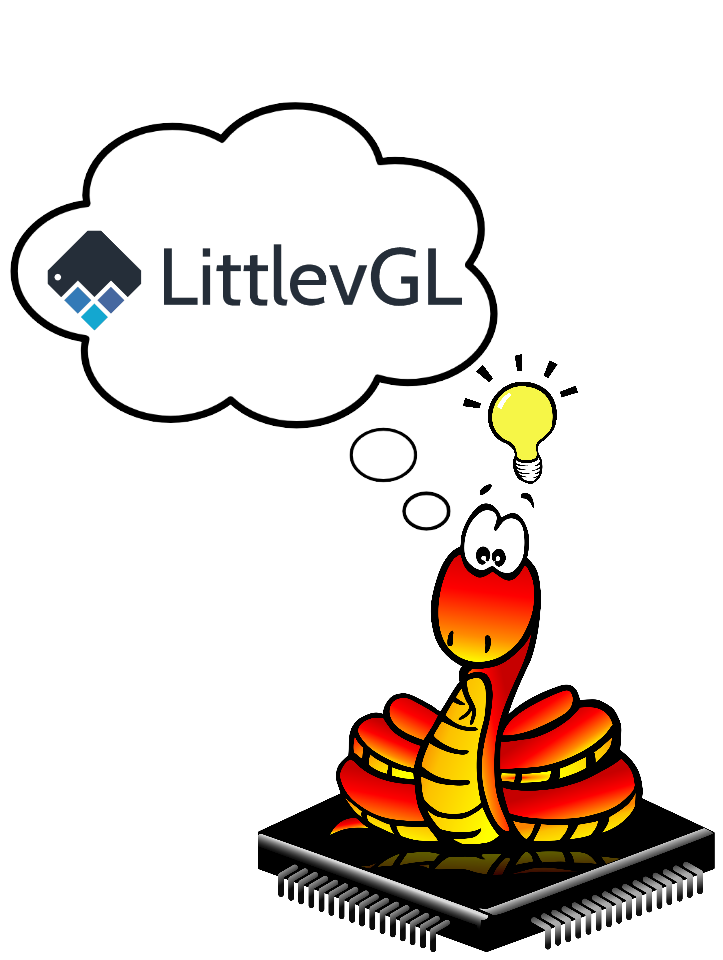 LittlevGL as a Micropython Library

Micropython is Python for microcontrollers.
With Micropython you can write Python3 code and run it on bare metal architectures with limited resources.

Here are some advantages of using LittlevGL in Micropython:

Micropython + LittlevGL could be used for:

TL;DR: It’s very much like the C API, but Object Oriented for LittlevGL componets.

Let’s dive right into an example!

In this example we create a button, align it to center and add a text label on it, “Button”.
Finally, we load the screen with the button, in order to display it.

In this example I’ll assume you already have some basic knowledge of LittlevGL. If you don’t - please have a quick look at LittlevGL tutorial.

In this example we create a reusable composite component called SymbolButton.
It’s a class, so we can create object instances from it. It’s composite, because it consists of several native LittlevGL objects:

SymbolButton constructor (__init__ function) does nothing more than create the two labels and set their contents and style.

Here is an example of how to use our SymbolButton:

Here, we set the size of each button, align btn1 to the page and align btn2 relative to btn1.
We call set_size and align methods of our composite component SymbolButton - these methods were inherited from SymbolButton parent, lv.btn, which is a LittlevGL native object.

For a more complete example, which includes other object types as well as action callbacks and driver registration, please have a look at this little demo script.

Here are some more examples of how to use LittlevGL in Micropython:

Creating a screen with a button and a label

Creating an instance of a struct

Setting a field in a struct

symbolstyle.text.color would be initialized to the color struct returned by lv_color_hex

Creating an instance of an object

The first argument to an object constructor is the parent object, the second is which element to copy this element from

In this example lv.ALIGN is an enum and lv.ALIGN.CENTER is an enum member (an integer value).

How does this work?
There are two Python features you first need to understand: lambda and Closure.
set_action function expects two parameters: an action enum (CLICK in this case) and a function. In Python a functions are “first class”, this means they can be treated as values, and can be passed to another function, like in this case.
The function we are passing is a lambda, which is an anonymous function. Its first parameter is the action, and its second parameter is the name variable from the for loop. The function does not use the action parameter, but it uses the name for setting the label’s text.
After setting the label’s text, the lambda function finishes and returns lv.RES.OK value. A lambda cannot have a return statement since it must be an expression. set_text is evaluated to None, so set_text(...) or lv.RES.OK is evaluated to lv.RES.OK and is treated as the lambda’s function return value.

You might ask yourself - why do we need to pass name as a parameter? Why not use it directly in the lambda like this: lambda action: self.label.set_text('%s click' % name)?
Well, this will not work correctly! Using name like this would create a Closure, which is a function object that remembers values in enclosing scopes, name in this case. The problem is, that in Python the resolution of name is done when name is executed. If we put name in the lambda function, it’s too late, name was already set to Pause so both buttons will set “Pause click” text. We need name to be set when the for loop iteration is executed, not when the lambda function is executed, therefore we pass name as a parameter and this is the moment it is resolved. Here is a short SO post that explains this.

Currently the binding is limited to only one callback per object.

How does it work?

LittlevGL is an Object Oriented component-based library. There is a base class called lv_obj from which all other components inherit from, and a hierarchy between the components. Objects have their method functions, inherit their parent methods etc.
Micropython Binding for LittlevGL tries to take advantage of this design, and models this class hierarchy in Python. You can create your own (pure Python) composite components from existing LittlevGL components by inheritance.

For more details, please refer to the README of Micropython Binding for LittlevGL.

How can I use it?

TL;DR: The quickest way to start: Fork lv_micropython. It has working Unix (Linux) and ESP32 ports of Micropython + LittlevGL.

LittlevGL needs drivers for the display and for the input device. The Micropython binding contains some example drivers that are registered and used on lv_micropython:

It is easy to create new drivers for other displays and input devices. If you add some new driver, we would be happy to add it to Micropython Binding, so please send us a PR!

How can I know which LittlevGL objects and functions are available on Micropython?

Actually, almost all of them are available!
If some are missing and you need them, please open an issue on Micopython Binding Issues section, and I’ll try to add them.

You can also have a look at the LittlevGL binding module itself. It is generated during Micropython build, and is ususally called lv_mpy.c.

That’s a huge API! There are more than 25K lines of code on the LittlevGL binding module only! Before counting LittlevGL code itself!

Anyway, remember that the module is on Progam Memory. It does not consume RAM by itself, only ROM.
From RAM perpective, every instance of LittlevGL object will usually consume only a few bytes extra, to represent a Micropython wrapper object around LittlevGL object.

I would like to try it out! What is the quickest way to start?

The quickest way to start: Fork lv_micropython. It has working unix (Linux) and ESP32 ports of Micropython + LittlevGL.

Can I use LittlevGL binding on XXXX Micropython fork?

Probably yes!
You would need to add Micropython Binding for LittlevGL as a submodule in your fork, and make some small changes to the Makefile and mpconfigport.h in your port, but that’s about it.
For more details please have a look at the README.

Can I use LittlevGL binding with XXXX display/input-device hardware?

I need to allocate a LittlevGL struct (such as Style, Color etc.) How can I do that? How do I allocate/deallocate memory for it?

In most cases you don’t need to worry about memory allocation.
That’s because LittlevGL can take advantage of Micropython’s gc! (Garbage Collection)
When some memory is allocated, Micropython will know when to release it, when it is no longer needed.
LittlevGL structs are implemented as Micropython classes under lvgl module.
You can create them as any other object:

You can also create a struct which is a copy of another struct:

Something is wrong / not working / missing in LittlevGL on Micopython!

Please report bugs and problems on the Micopython Binding Issues section of Micropython Binding for LittlevGL on GitHub.
You can also contact us on LittlevGL Forum for questions, or any other discussions.